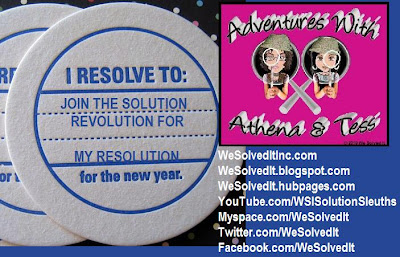 RESOLUTION: the act of finding an answer or solution to a conflict, problem, etc.: the act of resolving something.

New Year’s is a time when people make resolutions.  But what is a resolution, really?  It’s about RESOLVING what you consider to be a problem in the first place.

This has brought up something interesting – HOW DO WE DEFINE PROBLEMS?   For each person, a problem is different just like solutions and resolutions to those very problems are different.

When is a problem, really a problem?

If you solve the problem, does the problem go away to the point your solution becomes the ‘solve all’ to this particular problem in the future?

Ask yourself this question.  Then take a look at your New Year’s Resolutions.

Why do almost all New Year’s Resolutions FAIL?   It is because most resolutions are not actually resolving anything or solving the actual problem.  And this is because it is identified as an isolated thing.   Most things we must stop doing or start doing is based on BEHAVIOR – and so if we’re not resolving the root of the behavior, most often it translates to the same behavior in another form.

Have you ever heard of people who want to stop smoking say they don’t want to because they think if they do, they will gain weight?   Why do you think that is?   It is because the food replaces the cigarette. The behavior switches gears to something else because it really is about anxiety, discomfort, nerves, which is usually the base behavior for why people smoke in the first place.  Sometimes it is a generational learned behavior.   But it is not the cigarette, it is the behavior.

Have you ever heard of people who say their New Year’s Resolution is to be more productive, but by mid-year, nothing gets done because they’ve been too busy to take on the resolution?   This is because the problem isn’t really productivity, it is time management, being disorganized.  This is a behavior.

Have you ever heard of people say that for the New Year they want to lose weight?  But then just  a couple months later, they have not lost it?  This is because the problem with weight has absolutely nothing to do with food or even exercise – it has to do with psychological behavior (i.e. habits, willpower, mind-over-body, not stuffing emotional issues, etc.)  This explains why even if you run five miles and eat healthy, you can still have weight.   You have to let go of the issues in order to help yourself get rid of the pounds.  It’s all behavior based and that is the root.

So as we look at ‘resolutions’ we must ask ourselves what is it we’re really resolving.  Are we resolving – procrastination, obsession, defeat, control, anxiety, anger?

YES – THIS IS THE REAL NEW YEAR’S RESOLUTION… these are root resolutions.  And root resolutions solve more than one problem.  Root resolutions are acquired or learned behaviors that trigger a whole set of behaviors, actions and reactions as well as responses.  It is these root problems which cause a myriad of problems.

We tend to ‘categorize’ problems as one thing without realizing there is a string of other issues affiliated with a behavior which transfers across the board.

Take the common flu for example.  The problem is you have the flu.  And when you see multi-symptom relief over the counter – notice that this medication can solve coughing, itchy eyes, sneezing, fevers, sore throats, sinus congestion and a long list of problems.   We have all accepted that the flu has ALL these symptoms – so the flu is not just one problem.  For many it is several problems going on at once, right?

If we take the approach of our resolutions being like multi-symptom relief, we ultimately won’t really have to make New Year’s Resolutions anymore.  Changing one behavior (which is the common denominator of many of our problems) can eliminate a problem by being the ultimate solution.

So as you make your New Year’s Resolutions this year – RETHINK what it is that you are resolving. If you RESOLVE, you ideally DISSOLVE a behavior and then you will be SOLVE the problem.

Join us in our Solution Revolution and resolve to dissolve and you too can say “WE SOLVED IT!”

~ Athena & Tess – We Solved It
SOLUTIONS for everyday PROBLEMS
www.wesolveditinc.com